In 1993, my band (The Empire Hideous) had gone through a sudden and unexpected musician change when we lost our drummer Ed Minus. This happened immediately following our return from the West Coast to play America’s first official Goth Fest, dubbed: The Pilgrimage Tour.

Without a drummer we remained dormant and unproductive. In our downtime I decided to write some music that wasn’t exactly the typical style I was used to writing for Empire Hideous. At that point in my life I was expanding my musical tastes and had become a fan of big band, jazz, classical, and film scores (to name a few). For this new project I chose to incorporate the cultural styles of Medieval Celtic, Native American & Arabic. For several weeks I worked on writing & recording my music on a simple Tascam 4 track mini recording studio tape deck; a device I used to record new material for the band to learn how to play.

When I was done recording I called the album: OUT OF ANGER and made the decision to release it on cassette. On my own, I dubbed 100 copies of OUT OF ANGER on a dual tape deck. Then, using the band’s mailing list I announced it was available as part of my Empire Hideous merchandise and they sold within a month.

Two songs would emerge from OUT OF ANGER that would eventually become popularized by Empire Hideous performing them live: “Stealing From The Crow“ and “Kissing Your Poison.“

This recording is by no means professionally recorded, nor is the sound top quality. It’s (re)release is purely for nostalgic intent. OUT OF ANGER is something I created as a young musician/songwriter 25 years ago and should be appreciated for what it is.

Thank you for your support and I hope you enjoy OUT OF ANGER. 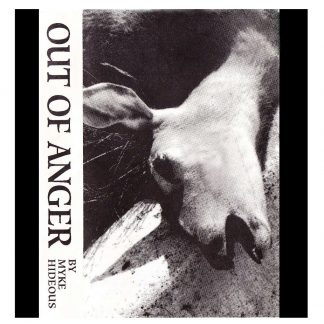