Immediately after parting ways with The Misfits, Myke Hideous came back to the USA and pieced together a four man band called SpySociety99 (aka: SS99). The SS99 conception is a formation of a secret society of special agent spies out to sabotage the music industry, among other devious spy stuff. Myke began using the alias: Special Agent SpY99 and before long recruited three additional special agents for his four man army of spies: Special Agent G-13 (drums), Special Agent In-Ovo (guitar) and Special Agent Que (bass). Together these four musical infiltrators went under the guise of SS99 and began performing gigs on a consistent level. SS99’s sound was a mixture of punk rock meets rock-a-billy, meets big band, meets jazz, meets swing, meets death rock. It wasn’t long before a four song EP/CD demo was released. A little more time passed and the band recorded it’s entire set list of songs, prepping for its release under the title: Die Punk, Die! However, SS99’s last performance took place on Wednesday, September 12th, 2001, unknowingly, and they were never seen or heard from again. As a result the LP remained unheard and unreleased for 14 years. In 2013, new material from the band in the form of a three song EP was discovered, entitled: Die Punk, Die! Now! In March 2014, all of SpySociety99’s music was released on CD: Die Punk, Die! with the added bonus EP: Die Punk, Die! Now! The CD package is a six panel digipak, loaded with photographs of the band and a short bio of it’s members. The band’s greatest songs are included on this CD, including: “SSUSA,” “NI4NI,” “Every Man For Himself,” “Rise Of The Insects,” and two cover songs from the band’s Bauhaus and The Misfits that the band popularized in their live performance. New material includes: “Bogus,” “Nostalgia” (remakes from the instrumental versions written by Myke Hideous in 2010 for the Living The American Nightmare documentary) and the very ominous: “Where Have You Been” track, featuring Norwegian crooner Mark Steiner as backing vocalist. ONLY 500 SS99 CD’s were pressed making it an extremely limited edition release. 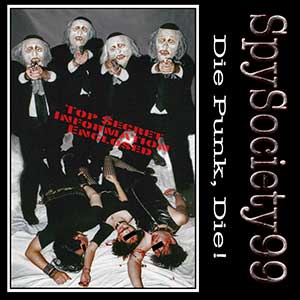