Please note that this download version does not contain the 3 Bonus tracks. The bonus tracks “Open Windows”, “Hereafter”, and “Thou Shalt Be Done” are available on Act IV: It’s Just A Matter of Time.

After Myke’s brief career as lead singer for the legendary punk band: The Misfits, Myke released an effort of songs recorded with The Empire Hideous before he joined The Misfits. The songs that appear on Victim Destroys Assailant were known to the band members as “the January sessions” and were recorded as a live studio session on January 1st, 1998, just before the band broke up on February 15th, of that year. More than 25 songs were recorded that day, but only 13 made it to the album for release. The three bonus tracks at the end of the album were taken from the previous EP release: Act IV: It’s Just A Matter Of Time. Musicians on this recording include: Mars Rio (guitar), Eve Lestrange (bass), Jeff Austin (lead guitar) and Rafael Angel (drums). The band spent more than eight hours in the studio that day recording song after song for the possibility of releasing them someday. Victim Destroys Assailant was released two months after Myke’s departure from The Misfits, on Halloween, 1998. Released at the very same time was the live Hideous recording of the band’s final performance at The Bank (NYC), on February 15th, entitled: I’m Dead, You’re Dead, We’re All Dead-Live! 1000 CD’s of Victim Destroys Assailant were pressed and hand numbered by Myke. Victim Destroys Assailant has since sold out and only digital versions of the tracks are available for purchase here. 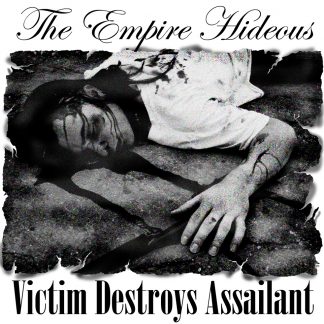